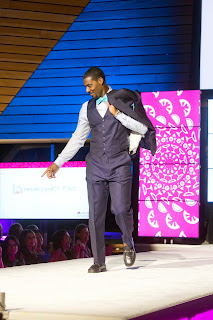 On November 18th, 2016, I met Ron Johnson.  Ron is a former Minnesota Gopher Football player and retired NFL receiver.  He's a current KFAN radio personality, FOX 9 Vikings Gameday LIVE anchor, businessman, go getter, husband, father and all around great guy. Ron volunteered his time as a "Shoe Guy" for the U of MN FashionFest in November. This is a fundraiser for the department of Pediatrics benefiting the Masonic Children's Hospital. We've been supporters for 20 years.

As I understand the story, Ron stuck up conversation with some my Through Jimmy's Eyes models (aka my kids) at the event. He heard about Jimmy's story and liked the fashion we were presenting on the runway. Ron came up to me asking to buy one of Jimmy's pocket squares. He was also eying a bow tie. After chatting with Ron, it seemed to me that he should have both. I offered him a bow tie as a gift.  He suggested that he wear it on the run way as my 8th model. Of course, we were thrilled and he quickly made arrangements to be my 8th model.  I met him behind stage to tie his bow tie. After the runway, Ron told me that he'd like to wear Jimmy's bow tie and pocket square on air for the Vikings vs Colts game at US Bank Stadium on December 18th and he would need me to come to the game to tie his tie. No problem, I can tie a bow tie!


So, on Sunday, December 18th, 2016,  I went to US Bank Stadium to tie Ron's bow tie. We watched the behind the scene activity and the show. Ron proudly wore Jimmy's bow tie and pocket square based on Jimmy's painting, Italian Coast."

Many thanks to Caryn Sullivan for her support and interest in Jimmy.  She will be at Sunfish Cellars on December 10th to sign copies of her book "Bitter or Better". 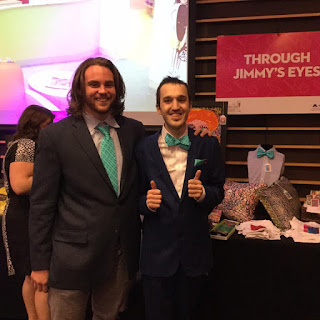 http://www.carynmsullivan.com/how-art-made-jimmy-reagan-better/
Posted by Unknown at 9:02 AM No comments: